Pardot Goodies from the Salesforce IdealExchange

This past year has been a great year for Pardot Admins everywhere. With each new release, Pardot has grown in functionality and has also become more integrated with Salesforce. This is fantastic as it allows for tighter data control, better personalization when communicating with prospects, improved user management processes. and an overall better user experience. In the wake of the new year, check out the newest Pardot features and updates on the Salesforce Spring 21 release notes to gain insights into what is coming in 2021.

As Pardot Admins, we often run into corners of the platform that require a little more creativity in order to solve a specific business need. Oftentimes, you can just “Google it” and voilà! Many in the Pardot community have the exact same question or problem you do, and although you find the answer (which is a huge relief), wouldn’t it be fantastic if there was a way for Pardot simply to add a fix for everyone?

Well my friend, grab a seat and let’s head over to the IdeaExchange!

What is the IdeaExchange anyway?

Back in 2006, the #Ideaexchange was born as a way to involve its customers (big and small) in a modern effort to crowdsource ideas for its product roadmap. This would ensure that the community got a platform that they could use to contribute their ideas and wishes. A place where the Pargods could go for inspiration if you will as they build the world of tomorrow.

How does one enter their idea into the IdeaExchange?

Need more details? We wrote a little about the history of the AppExchange.

To celebrate the IdeaExchange 14th anniversary this year, here are 14 wonderful ideas worth upvoting and adding to your wishlist, just in time for the new year.

1. Ability to set field character limit for custom fields on Pardot side
This feature would help reduce conflicts between both platforms when it comes to character limits. We wrote about how to fix this with Javascript.
Upvote >>

2. Country lists match between Salesforce and Pardot
This feature would help create more symmetry when it comes to Country values between the two instances. Currently, there are several different values between both. We wrote about how to fix this with Heroku.
Upvote >>

3. Customize all list view columns
This feature would allow you to customize list columns for easy scanning of field completions and provide reporting-like capabilities.
Upvote >>

4. Notification on SFDC connector errors
This feature would allow Pardot admins to create notifications in summary of sync errors to make sure they are resolved promptly.
Upvote >>

5. Parameter in automation rules for “is changed”
This feature would allow you to see if there was a change in a field to trigger an action based on the change.
Upvote >>

6. Allow custom object fields to be used as email tags
This feature would allow email marketers the ability to inject values from custom objects into emails and other pieces of Pardot generated content.
Upvote >>

7. Ability to block competitor domains from all emails including autoresponders
This feature would ensure that none of your competitors receive the email you set up with your forms or enter your nurture series.
Upvote >>

8. Conditional options for completion actions
This feature would allow marketing operations teams to save on automation rules and contain automations at the form level with some IF/THEN preferences based on user input on forms.
Upvote >>

10. Email Templates with Completion Actions
This feature would make it easier to build email templates that scale without the need to use Engagement Studio or other automations to prioritize actions.
Upvote >>

12. Time zone dependent delivery for list emails
This feature would allow marketing operations to choose one time and send it across that time in different time zones. It would save the User from creating multiple list emails with the same content.
Upvote >>

13. Allow customization of notification email subject/content
This feature would allow you to use Dynamic Content and Variable tags on the subject line of notification emails (e.g. Notify User [when someone fills out the Contact Us form]) which currently is auto generated and cannot be updated.
Upvote >>

14. Allow variable fields in SFDC tasks
This feature would allow you to add variable tags to the Salesforce task you assigned to the User. Currently the message is static and everyone gets the same.
Upvote >>

You can find more ideas to browse while you binge-watch the ParDreamin’ 2020 videos.

Will your Pardot dreams ever come true?

While some Pardot Admin recommendations get picked up and implemented faster than others, it all depends on community participation and perceived need from the Pardot product team. In fact, to help drive ideas, Salesforce created a prioritization system (the next cycle starts in mid January 2021) where you can see top feature suggestions across the ecosystem battle it out!

You may be wondering, do any ideas actually make it to the product? The answer is yes.

Dreams do come true! In fact, these two ideas were just releases in the last release.

Our friend Jen Kazin recently discussed the new Email Builder at ParDreamin earlier this month. You can watch a quick demo of the feature by Salesforce here.

Are there any features or functionality you wish you could see? If so, let us know below. With a little bit of luck and support from your Pardot and Salesforce Ohana, you might also uncover the secrets of the IdeaExchange and get your idea on the scoreboard.

Don’t forget to vote for these ideas, submit your own and chat with us on Twitter, LinkedIn or simply subscribe to the blog on the left side of the page.

The post Pardot Goodies from the Salesforce IdealExchange appeared first on The Spot For Pardot.

Scoring Categories and HML: The Peanut Butter and Chocolate Moment

Let’s start by saying that if you’re not using scoring categories in Pardot, you probably should be. If you offer more than one solution or service or have multiple topics represented on your website, scoring categories are for you. These little gems allow you to break down your total score and identify your prospects’ specific areas of interest. This is huge when it comes to tailoring your marketing messaging and directing your sales team’s efforts.

To get started with scoring categories, check out Erin Duncan’s post Pardot Scoring Category Basics: What, How & Why.

Another super cool feature in Pardot that you may not be utilizing is Handlebars Merge Language (HML). HML, rolled out in August 2019, expands the personalization capabilities of Pardot well beyond Pardot Merge Language (PML) and introduces the ability to use conditional statements (among other capabilities).

Now for the peanut butter and chocolate moment! 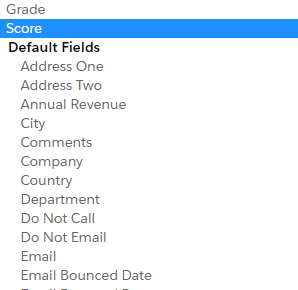 Step 1 – Create custom prospect fields (checkbox) in Pardot that align to your scoring categories. I also like to use a standardized naming convention so the fields are 1) grouped together and 2) easy to identify.

Step 2 – Create automation rules to update the checkbox value to “True” based on the achievement of a defined category score. You’ll want to set the score to a value that is high enough to show significant interest in the topic. This number will vary based on your scoring model.

Step 3 – Create dynamic content for each of your topics. When doing this, you’ll also need to consider how you want the content to display in your message. If a prospect has an interest in multiple topics, do you want to display a block of dynamic content for each in the email or would you prefer to only show one? In this example, we are going to choose to prioritize our topics as 1) Dogs 2) Cats and 3) Birds and display only one piece of content in the body of the email. 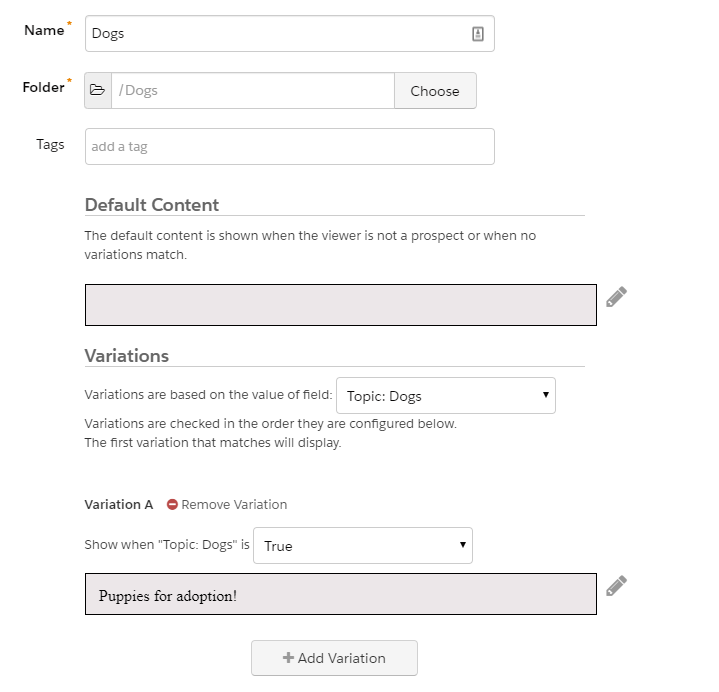 Note: The default content for Dogs is blank. This was done intentionally and is necessary to ensure the proper functionality of the “else” HML statements. Only add default content into the final topic in your list of priorities – Birds in our example (see below).

Step 4 – Now the HML magic! The code below is essentially a conditional statement based on the dynamic content that we previously created.

It helps to have a decoder ring to see exactly what’s going on here. In this example, the dynamic content aligns to the topics as follows:

Based on this, the plain English behind our statement is:

Scoring categories and HML are very powerful features in Pardot. While both add tremendous value independently, they can be combined to open up even more possibilities. If you need a hand getting started with scoring categories, HML or have questions about how these features can work together, drop us a note or add your questions below in the comments.